It’s been a few days since a post. Annoying since I stated I would work on my novel for 30 minutes a day. Ironically my laptop works but it has a meltdown when I use the keyboard. Inconvenient.
Typing one-thumbed on my phone makes for a counter-productive day!

Now since I can’t write properly I’ve made it a mission to keep my brain enriched and watch obscure movies and get through some books (the pile of unread is shameful).

With that in mind I watched The Big Year (2011). It’s based on the book The Big Year: A Tale of Man, Nature and Fowl Obsession by Mark Obmascik.
See this film!!!
After all the supernatural, drama, heavy, depressing, OMG comedy that current boundary pushing cinema and television offers; it was so lovely to watch this gentle, educational comedy starring Jack Black, Owen Wilson and Steve Martin. Given comedic veteran Martin was in this, the style of comedy made me feel it was from the innocent humorous golden age of the eighties when Steve Martin was witty with the spoken word and John Candy’s jovial bouncing belly made us chuckle endearingly.

It also had a bit of Walter Mitty flavour for me; I daresay from the travel perspective and the unique work/hobby choice comparisons. i.e. Walter Mitty worked in the dark rooms of Time Magazine, and The Big Year characters have an insatiable passion for bird watching. Both are ‘uninteresting’ points of view, suddenly made fascinating.

Basically three men from different walks of life are on a race to achieve a Big Year – a prize-less honour system based competition for who can spot the most species of birds in North America within a calendar year. Our main character is the driven young underdog Brad (Black), a wealthy retiree Stu (Martin) finally getting out and reaching his dream, and arrogant, overachieving asshole Kenny (Wilson) who stops at nothing so no one beats his previous Big Year record.

It’s funny but not outrageously, however it doesn’t need to be. The friendship between Brad and Stu is just charming and the cinematography dedicated to showing this sport for what it is, was remarkable. This competitiveness between the characters is quite frustrating when you remember there is absolutely nothing at stake, and yet it changes each of their lives personally – I guess like any big experience does. That’s the magic of travel in any form.

It’s a very simple and addictive premise to watch these characters do the one thing we all want – to live out our dreams. However it was also very clever to see how our passions can impact those around us, and not always positively. Wilson’s character is like the popular guy at school…and then you’re thinking ‘dude, calm ya farm, it’s bird watching!’

This movie really sells that message ‘life is a journey, not a destination’. At the end I was left feeling so damn GOOD and I encourage others to watch it and feel goofily happy for a while. 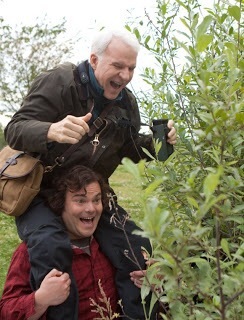