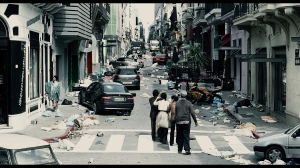 A few weeks ago on a mundane Friday night, I found myself stuck on the couch at 11pm after watching nothing in particular thanks to the incessant commercials. I decided I’d watch about 5 minutes of one late-night movie before calling it quits. I started to watch Blindness, what seemed to be a B-Grade sci-fi drama, about a city that is shattered by a rapid epidemic of instant ‘white blindness’. I kept telling myself that I’d turn it off and go to bed being close to midnight, yet I found myself being drawn into this meltdown disaster movie.

Based on the book by José Saramago (which I haven’t read and now want to!), the story centers on one woman, the Doctor’s Wife (played by Julianne Moore) who inexplicably doesn’t go blind as the rest of society around her, and joins her infected husband, the Doctor (Mark Ruffalo) in a quarantine building to support him. They decide not to divulge to the increasing number of fellow shunned that she can see and go along with the lie that she too is also blind. She silently and carefully helps the sufferers around her, particularly seven others whom within form a tight bond. She bravely witnesses the sheer horrid decay of the conditions of the building as well as the eventual breakdown of society within the festered walls, always wondering what is happening on the outside.

This movie isn’t the best thing I’ve ever seen, but my god it was haunting. To see how quickly things can turn to shit by taking away one of the most taken for granted senses given to humanity was quite confronting. Watching people step in their own feces, wounds turning gangrenous and the initial ‘healthy’ on the outside dismiss the afflicted as rats in a cellar makes you really question how quick our everyday lives could turn into the middle ages at the drop of a hatch with enough panic.

Please note below are some spoilers for discussion, so if you haven’t seen and want to then stop reading.

Now as typical it is to the human race, when society crumbles, so do morals. People turn twisted, individuals pick sides and eventually everyone is out to fight for themselves to survive. Naturally in this movie, there is one asshole that decides he’s going to run the joint and takes over control of the food rations (remembering everyone in there is blind except the Doctor’s Wife). At first he and his blind cronies redundantly demand valuables from everyone in the other wards in exchange for food. Then as this is utterly pointless in a quarantine hospital, it would only be a matter of time before he demanded the women. Now for me, as a woman, this was so very hard to watch. I’m not normally squeamish or a prude but the portrayal of animalistic masculinity and aggression really made me uncomfortable. I daresay this would’ve been the director Fernando Meirelles’s intention (again I haven’t read the book). I questioned my own beliefs about what I would do in this situation; starve or put out to such abuse and sadism? From my living room it was easy to pick a third option and go Tomb Raider but then I would be ignoring the issue put in front of me. I’m not man bagging, and of course this was one representation of what would happen if this happened to society, but it was quite sickening to see that group of men in this film turn absolutely sexually feral and all rights for women to plummet into the ether. I suppose it made me feel that despite it all, the female gender at its primal form will always be second class. Well played Meirelles.

This film is worth a watch if you’re into psychological disaster films. However I won’t need to watch it a second time; my husband and I left the room feeling quite violated and depressed. No one needs that twice!